MEDITATIONS ARE ON ZOOM OR IN-PERSON
Click link below to see Highlights of our 16 years
16th Anniversary Film
﻿"If every child in the world were taught to﻿﻿ meditate, we would eliminate vio﻿﻿lence in one generation."
His Holiness, the Dalai Lama﻿ 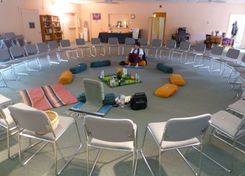 Begun with 8 women in January 2006 the Women's Meditation Circle has grown to over 500.  It serves southwest Florida's spiritual community in gatherings of friendship, respect, and devotion.  We meet on the third Friday of the month - see schedule below.  The Circle is a place where women come together, hold intentions of healing, of planetary peace, and focus on the raising of human consciousness. They honor one another and celebrate the gifts each woman brings to the circle.

Experienced guest meditation leaders are chosen to lead the group.  Each leader comes from a different spiritual background, training, or discipline and is capable of holding space and leading groups.  Meditations are varied, and include guided visualization, mindfulness, movement, sound and chanting ​as well as silence.
​CAL﻿ENDAR 2022 - 2023 - The 16th Consecutive Year 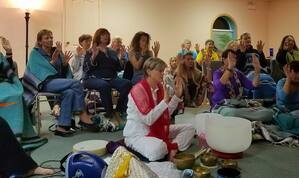 2023 Schedule: 3rd Friday each month except Jan. and Dec.
​In Person and Simulcast on Zoom

Portals to Pure Being - Featured Meditation on Insight Timer

Patricia Cockerill's meditation Portals to Pure Being was selected by the Editorial Staff of Insight Timer as a "Featured Meditation."  The meditation appeared on their Home Screen to "encourage our 15 million meditators to use it and discover you and your wonderful work" said the Editor.  Within hours of its appearance as a "featured" meditation accolades on the depth, serenity, and spaciousness of this meditation were pouring in from around the world. ​​If you'd like to listen to it click this link:  Portals to Pure Being
HONORS - AWARDS - HIGHLIGHTS

The Women's Meditation Circle holds a fund-raiser every fall for a worthy charity.  This is our Karma Yoga "service give back" to the community.  Each year the Charity recognizes the efforts of the Women's Circle and responds with certificates.  Joel Swallow, Chairman of the Mayor's Feed the Hungry Program awarded the Women's Meditation Circle, a Certificate of Appreciation for its ongoing support to the organization. This program across Sarasota and Manatee counties feeds hungry children and their families.   In 16 years this Circle contributed over $20K to charities. 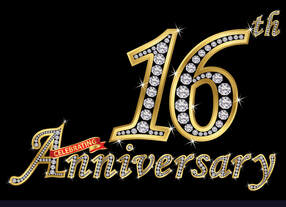 ​On January 8th, 2016, Rising Tide Spiritual Center was filled as we celebrated the 16th Anniversary of our Circle.  Some of the original 8 members returned.  Many watched on ZOOM from all over the US and Canada.

Leaders of several spiritual centers spoke, along with members of the Circle.  Recording artist Faerie Elaine Silver followed the Ho'Oponopono Meditation with a specially recorded song on Forgiveness.  The 16 Anniversary Film highlighting the women of the circle and their achievements was shown. It includes a memorial to the 16 members we lost in the last 16 years.
​The evening ended with a beautiful rendition of Leonard Cohen's Hallelujiah sung by The Venice Choir members Ali Nieves and Jackie Wands.

The Women's Meditation Circle has a "home" at Rising Tide.  Over the years, our group has conducted Fund-Raisers on behalf of the center.  To acknowledge those contributions,  Rising Tide held a "Recognition Dinner" to honor the efforts.  It was the first time the two communities came together to meet, learn about our shared values, and to support each other's work.  It was a sincere mingling of mutual respect and acknowledgement that the center is our spiritual home.

On YOUR behalf, we accepted a beautiful blown glass spiral in blue and green. It signifies the emergence of the spiritual work our two communities do.  Out of a  'rising tide' of blue at the base the spiral emerges into a teardrop shape.  It's inscribed, "Jo and Patricia - Thank you for Everything - Rising Tide International."   We thank ALL the women of the circle who commit to the ideas of our gatherings and support us and Rising Tide. 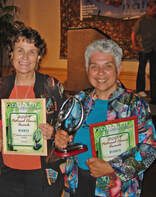 The Women's Meditation Circle was named #1 Best Meditation Group for six consecutive years by winning the NATTIE AWARD from Natural Awakenings Magazine.  The Meditation Award category, voted by thousands across southwest Florida, was "retired" by the magazine in 2015.
​
2006-2016 Highlights Video          10th Anniversary Celebration Jan. 8, 2016 Video
This Interview  with KDWRADIO & Margaret Germain on the History of the Women's Circle - KDWRadio

Starsoundings offers free MP3 meditation downloads.  Please click on the round button on the left to be taken to that page.
Sign Up for Newsletter
By Constant Contact